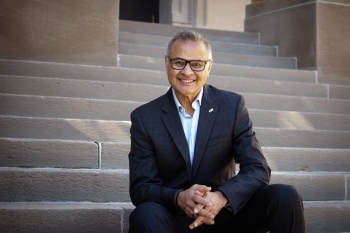 UI Professor, Contemporary Choreographer and Researcher of the Brazilian Popular Culture Armando Duarte, a Brazilian/American citizen, holds a BS degree in Physical Education from the University of São Paulo and an MFA degree in Choreography and Performance from NYU (Tisch School of the Arts). Since coming to the UI in 1993, he has created 85 original choreographies plus re-staged works for companies and dance programs in the US, Brazil and other countries, with more than half of his repertory being based or related to his native Brazilian culture. He has been a guest teacher for some of the most important Brazilian Dance Companies such as, the São Paulo Companhia de Dança, the Bale da Cidade de São Paulo and the Escola do Teatro Bolshoi do Brasilamong others. Currently, his academic research involves an in-depth investigation on the Brazilian popular culture of Samba and Carnival, for what he created courses for UI students that involves theoretical and practice experiences on various aspects related to the “culture of the body” in the context of Samba and Carnival in Brazil, such as Brazilian Culture and Carnival, and Brazilian Social Dance, the Samba. He has also led groups of UI students to experience the making of the Brazilian Carnival Parades and the African- Brazilian diaspora in dance, music, religion, design and street performances in the cities of Rio de Janeiro and São Paulo, Brazil.

In the US, he has presented lectures on the subject at numerous Conferences and Universities, including visits to the University of New Mexico, University of Wisconsin Milwaukee, Ohio State university, Dennison University, San Diego State University and Augustana College and virtual presentations for the Imperial College of London, among others.

His Conference attendances include participation at the American Popular Culture Association Conference (APCA) in San Antonio, TX (2011), Washington, DC (2013), New Orleans, LO (2014), Seattle, WA (2016), San Diego, CA (2017) and Indianapolis, IN (2018). At the University of Iowa, he is a two-time winner of the Iowa Old Gold Summer Fellowship; and has received several grants from the Support Program for Arts and Humanities and the Arts and Humanities Initiative Program.

At the University of Iowa, he has been awarded the Iowa Old Gold Summer Fellowship; the Support Program for Arts and Humanities, the Arts and Humanities Initiative Program, and the Obermann Center for Advanced Studies Interdisciplinary Research Grant.  Professor Duarte is also a member of the American and Portuguese Studies Association (APSA), Brazilian American Studies Association (BRASA) and the Conference of Latin American and Caribbean Studies (CLACS).

His current service at the University of Iowa include directing all dance productions and directing the BFA program in dance. He is a co-chair of the Diversity, Equality, and Inclusion Charter Committee; a co-chair of the CLAS Diversity, Equality, and Inclusion Charter Committee Strategic Planning and a member of the CLAS Executive Committee.

Courses Taught:
Back to top »