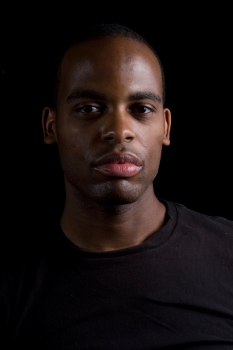 Christopher-Rasheem Mcmillan is a performance related artist and scholar. He has a joint appointment between Dance and Gender, Women's & Sexuality Studies at the University of Iowa. McMillan received his BA from Hampshire College (2007), his MFA in Experimental Choreography from the Laban Conservatoire, London (2011), and his Ph.D. in Theology and Religious Studies from King’s College, London (2017).

His interests concern choreography in an expanded field, something that he has approached through experimental practices and creative processes in a multiplicity of formats and expressions. He uses video, performance, photography and oral storytelling to explore themes of race, memory, queer desire, religion, personal and public mythology.

McMillan’s performance works have been seen at venues such as the Bates Dance Festival of Bates College, Providence International Arts Festival (PVD), and The Dance Complex and Green Street Studios in Cambridge, Massachusetts, and in performance platforms such as the 2011 participatory event Beyond Text, London. He was a Five College Fellow for the 2013–14 academic year and Grant Wood Fellow for the 2016–17 academic year. His writing has been published in The Journal of Dance, Movement & Spiritualities, Kinebago, and Contact Quarterly.